According to the legal structure, cooperatives have two bodies: the Board of Directors and the Board of Supervisors.

The Board of Directors consists of five members and three alternates. It is the body that is in charge of the upper management of the cooperative. They meet in ordinary and extraordinary sessions. They last three years in their functions and are renewed by partialities. The Board of Directors delegates part of its functions in the manager and president, who legally represent the cooperative.

The Board of Supervisors is composed of three members and two alternates, they last one year in their functions. It is the body responsible for observing the management, examining the accounting, inventory, balance sheet and financial statements of the cooperative.

The General manager, appointed by the Board of Directors, is the one who, in conjunction with the President, legally represent the cooperative, according to power. He/She is in charge of executing the agreements and orders.

The cooperatives in Chile are supervised by the Department of Cooperatives, dependent of the Ministry of Economy. They must submit its financial statements for review by independent external auditors.

In addition, it has teams of professionals that work in the area of management, marketing and technical advise for the partners. 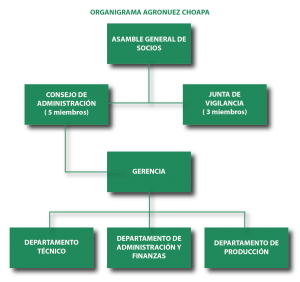